See Seattle from the Sea with Argosy Cruises

By: Blogger Robin of Around the World with Kids / Photos by Atma Photography

When exploring a new city, I love to get out on a tour right at the beginning of the trip. A tour by foot, by bus, or by any other transit, getting an overview of the city’s history, neighborhoods, and spirit helps set the stage for your trip, and helps me decide what I want to see and where I want to focus your time. But when you have a city that is as focused on the waterfront as Seattle, there is only one way to take that tour – it is on the water. We cruised with Argosy Cruises on their Harbor Cruise and got to see the gorgeous skyline of this unique city while learning all about the neighborhoods, the history, and the vibe that makes Seattle a place like no other. 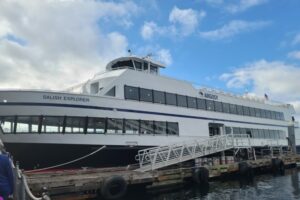 Argosy Cruises is over 70 years old. Started as the Spring Street Water Taxi, the original owner, loved to talk about his beloved Seattle. He started to talk about the history of Seattle and what you saw on the shoreline as people rode his water taxi. He soon found that people were boarding the taxi simply to listen to his tour and a new idea was born. With a fleet of six ships Argosy Cruises offers daily Harbor Cruises, a weekend cruise through the Hiram M Chittenden Locks, and the opportunity to rent the boats for private events. But the star of the lineup is the Harbor Cruise, which allows you to see the shoreline of Seattle, the port, and hear all about the marvelous history.

What the Trip Entails

Once you board the ship, you have the option of sitting on the upper deck, or inside in one of the two lower decks. At the time we rode it was October 2021, and we did not feel comfortable spending a lot of time in an enclosed space, so we choose to ride in the upper deck. This also offered you a more unobscured view of the skyline of Seattle. 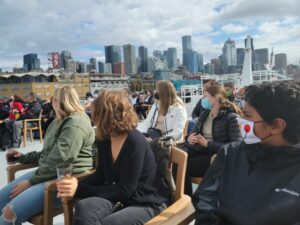 Once the ship was fully loaded, the ship pushed off and went North up the Seattle coastline. From here you learned about history of the Seattle Aquarium, the Edgewater hotel, and a particularly funny story about the Beatles Stay, and all about Pike Place Market. 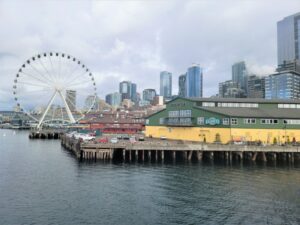 You do not actually see the Space Needle until you are further up North, but tour guide held us in suspense about the iconic building on the Seattle skyline. Instead, he discussed the Queen Anne neighborhood, and where you can see the “view” for Frasier’s apartment. I was disappointed to learn that the building he lived in did not actually exist.

At the Pier 86 Grain Terminal, you turn around traveling south with the shoreline on your left. At this point, you get a clearer view of the Space Needle, and learn about the speed with which it was built, and the fact that it is designed to survive an 9.1 magnitude earthquake. Apparently, that is where you want to be when the big one comes. (He also reminded us we are overdue for the big one 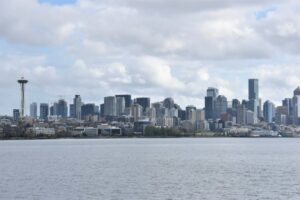 You actually sail south of Pier 55 where you start, and down to the port area. Here you ride among the giant container ships, and learn about the way they are treated, how they are loaded, and what it takes to keep a port this size moving. We turn around back north and pass the Lumen Field on the way back. Apparently, the stadium can be so loud that during one playoff game, the noise from the crowd recorded as an earthquake! 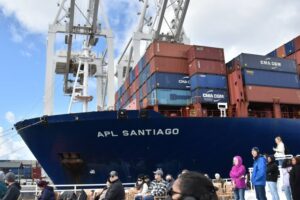 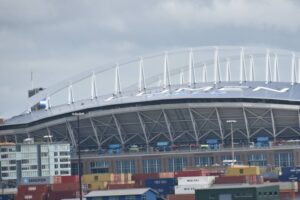 Once you are back to the dock, and patiently wait as they line up the boat and get ready to disembark. Pro-tip:  Stay on the top deck until the ship is actually ready to disembark. There is no need to hurry to line up and be stuck in the stairwell as they go back and forth to align right. I learned that one the wrong way…

I often find that tours at the beginning of the trip are a great way to lay the groundwork and understand the city. Argosy Cruise is great to do that in a unique way. You get to see it from the sea, but it allows you to get a lay of the land and understand the city before you go exploring. Seattle is truly a seaside city and getting on the water is the best way to get to know it. I highly recommend you not only book a cruise with Argosy, but you also make sure to get it in in one of your first days in Seattle.

Want to know more about what to do in Seattle? Check out my post, the Ultimate Long Weekend in Seattle to plan your next trip.